WiFi 6-enabled devices are already beginning to roll out onto the market: Wi-Fi CERTIFIED 6™ routers are available, and big-brand mobile devices like the Apple iPhone 11 and Samsung Galaxy Notes already support the WiFi 6 protocol. But what can we expect with the new WiFi standard, and what does this mean for the old protocols? 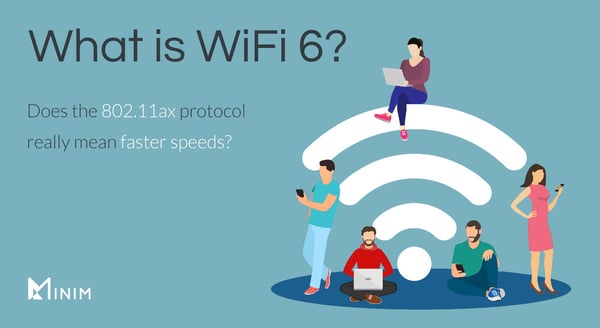 The previous standards utilize the same technology, but they’ve been renamed to make designation easier and more accessible from now on. Most of the older protocols past WiFi 4 are no longer widely in use:

What does the new naming scheme stand for?

Until the new naming system, each new WiFi protocol was referenced by an esoteric naming scheme. Knowing the differences between the 802.11g and 802.11n protocols or whether 802.11ac was faster than 802.11a was only in the repertoire of experienced professionals or learned enthusiasts.

Now, in an effort to make WiFi classification both easier and more accessible, the WiFi Alliance decided to rename the iterations of the WiFi protocols with version numbers. WiFi 6, the new generation of WiFi, is 802.11ax.

As a side note, WiFI 5, the previous iteration of the WiFi protocols, probably won’t be used much as the protocol is phased out. From now on though, the WiFi designation of numbers five and six should be listed on compatible hardware.

What does WiFi 6 bring to the table?

The biggest, most exciting point to WiFi 6 is its speed capabilities compared to WiFi 5. In theory, a WiFi 6 capable router could hit speeds over 250% faster than current WiFi 5-enabled devices. Intel says: “WiFi 6 is capable of a maximum throughput of 9.6 Gbps across multiple channels, compared to 3.5 Gbps on WiFi 5.”

The higher speed capability of WiFi 6-enabled devices is thanks to technology such as orthogonal frequency division multiple access (OFDMA); MU-MIMO; beamforming, which enables higher data rates at a given range to increase network capacity; and 1024 quadrature amplitude modulation (QAM), which increases throughput for emerging, bandwidth-intensive uses by encoding more data in the same amount of spectrum.

While the hype around WiFi 6 certainly boasts excitement toward an increase in speeds, it isn’t the only improvement WiFi 6 has against WiFi 5. The new WiFi 6 technology also brings improved connectivity to WiFi 6-enabled devices—while still maintaining the backward compatibility for older devices. WiFi 6 works better in higher-density environments and supports increased capacity of devices while improving device battery life and higher data transfer rates.

The main goal of WiFi 6 is to bring improvements to network connectivity. When WiFi 5 first launched, the average home network dealt with about five connected devices. Now, that number is nine devices, and it’s continuing to grow—and that number might hit 50 devices in only a few years. With all of these devices connected at one time and fighting for bandwidth, home networks can get clogged and slow down.

With WiFi 6, home networks can now find device bandwidth mitigation. Routers with WiFi 6 compatibility can now communicate with dozens of IoT devices at once, utilizing new technology to keep everyone connected.

That sounds nice, but how do I get WiFi 6 at home?

Cycle out your devices. Although it isn’t recommended to go out and purchase all-new devices—not everyone can afford that!—WiFi 6-compatible devices will begin to hit the market and remain available as you find the need for a new phone or laptop. Remember, too, that you’ll need a WiFi 6-enabled router for your home devices to take full advantage of WiFi 6’s assets.

It might be worth noting that, on purchasing a WiFi 6 enabled router, your WiFi 5 devices should have an easier time connecting to and remaining connected to a WiFi 6 router.